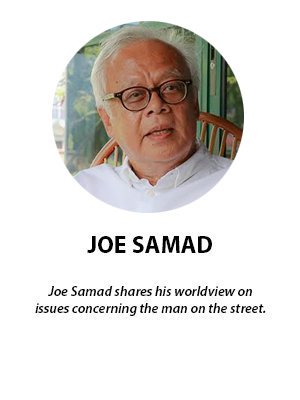 Malaysians seem to be suffering from acute analysis paralysis. There is a current tendency of over-analysing or over-thinking our current situation without concrete action or solutions, leaving us citizens paralysed.

We see petitions going around asking people to sign for this and that from the comfort of our armchairs. We are quick to sign and pass the same around inviting others to. We shout noisily but silently over Facebook, WhatsApp, Twitter and other social media. We intellectualise every situation in politics. But when it’s time to call for action we are paralysed.

The same is happening in America where Trump has inflicted great damage to the nation’s image and created political divisions. The White House seems unable to deal with Twitter-crazy Trump.

The best brains in America are being led by a Trump who seems mentally unstable, removing people whom he dislikes or who have gone against his wishes.

In Malaysia, we read about prominent positions in government-linked companies given to people who have close associations with Perikatan Nasional leaders.

Before we cry foul, this happens with every change in government and not only with PN.

News of the impending removal of the speaker and deputy speaker of the Dewan Rakyat remind us of the Najib Razak era, when the political institutions and the doctrine of separation of powers was challenged over the 1MDB affair.

We now appear to be going down the same road as the US. People have been talking about a “third force” in Malaysia. But what, really, is the third force? Is there a face to the third force?

If we wish to change the government, we need to join a political party, form a political party or stand as independents on a common platform. Otherwise, the same faces will come back and will govern us – that is already guaranteed.

We are all tired of the same political stereotypes who are just there to secure their sense of self-entitlement. We are tired with an “opposition” whose daily bickering over who will be the next prime minister seems to take priority over the people’s welfare.

Now the PN government is taking part in the same game by indicating that Muhyiddin Yassin will be nominated again as prime minister post GE15.

The worldview of these politicians is so alien to mere mortals like us that it’s virtually impossible to apply our norms of morals and ethics in our everyday debates and discussions.

We know what is right or wrong, but for some of them, it doesn’t really matter. You can put on a tight T-shirt showing your pot belly, ride around on a 100cc motorcycle, reinvent yourself as the people’s hero and enjoy the fame and adulation on the street.

Guilt and shame are not in their vocabulary.

We have already been in limbo because of the MCO; now when it comes to showing our displeasure of government or political leaders, we are reduced to merely signing petitions.

Are petitions effective? You can garner a million signatures but will it bring about any changes? Some political leaders already know that the people will be unhappy about certain moves or that it may violate certain laws, procedures, rules and regulations but they will do it anyway.

Why? To them, it’s always a political game of chess and despite the various strategies, they know there will be one winner and one loser.

They are seasoned enough and know the risks like the Sheraton move.

The mentality of winner takes all still prevails and they are seldom checkmated.

In March, Muhyiddin was brutally honest when he said the PN government is not necessarily the one we voted for. Some say he has been shielded by the MCO, giving him time to consolidate his position.

Whatever it is, whether it’s luck or God’s will, I would rather have Muhyiddin helm the nation at this point in time. He has done well in giving Dr Noor Hisham Abdullah, the health director-general, free rein to map out a strategy to control and combat Covid-19.

Imagine the PH government still being in place: they would still be busy bickering over who will be the next prime minister.

Dr Mahathir Mohamad, running out of options, has reneged on his promises for the umpteenth time and has now nominated Shafie Apdal as his choice for the next prime minister. Come GE15, will it be a battle between Muhyiddin and Shafie?

That will be an interesting proposition as both gentlemen were the trigger that brought Barisan Nasional’s downfall by going against Najib over the 1MDB affair.

It will be up to the people to decide.

Although it may be a foregone conclusion that the same people may come back and govern over us, there is still one more option, the so-called “third force”.

The third force does not necessarily need to be able to form a government, but their voice in Parliament will keep the government honest and ensure that it will deliver the promises to the people.

By putting a face to the third force and participating in elections, we can affect changes for a better Malaysia.

The views expressed are those of the author and do not necessarily reflect those of FMT.

Fake or not? Check our quick fake news buster here.

Subscribe to our newsletter and get news delivered to your mailbox.

Education: Back to Basics